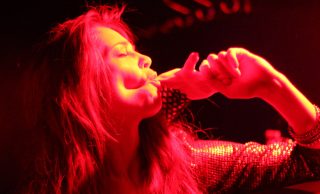 It’s cake-cutting time and I’m blowing the hot guy in the string quartet when I look up and realize it’s just shrimp cocktail. I shrug and keep going. At least one of us is having a good time.

Clare looks so ordinary in her long white dress, twirling around the catering hall with her Peace Corps boy-husband that doesn’t look a day over seven-and-a-half.  Twelve hours ago I was twirling like that on the side of the FDR after too many Special K-laced Special K bars. I refuse to learn his name and insist on calling him Slam Piece. “Nicknames are a huge honor,” I explained to him while being escorted out of the Cheesecake Factory all those months ago, but my words just glanced off his smooth-shaven skull. So then I struck a match on it, lit my cigarette, and we never spoke of it again.

But you know it’s there

“I’m so bored,” I murmur to Sophie through the benzo haze. I haven’t slept in four months. Sophie, my half-adopted half-sister, is still clutching her basket of rose petals. “Dafna, I’m a princess,” she squeaks from underneath her flower crown. “Listen,” I say, doing my best Fred Durst impression. “Keep talking like that and you’ll run out of friends by kindergarten.”

She’s so skinny. I make a mental note to lunge at her with a knife during my next psychotic break. I steal her Blow Pop and head for the bar.

I’ve got to move,
I’m going on a party ride

“What can I get you?” the bartender chirps. I cackle. He looks like Moby with AIDS with a mustache but also doesn’t look like anything at all. “Crack?” I expect him to roll his eyes, but instead he shakes his head. I scoff. “What about Molly? Dust? Blow? How about a Crestor on the rocks?” He shifts awkwardly and stammers, which I do not like. I flit. “We have cabernet, pinot noir, and malbec.” Suddenly my stomach turns and the room spins and I grab the garnish tray and crumple into a delicate ball under a stool. I’m so pretty when I break.

Weddings make me constipated for so many reasons (I’m allergic to taffeta and Roy Orbison). I shove two Adderall XR-15’s into my nostrils to balance out the wine and the Ativans I found at the bottom of my purse.

“Why are women required to be brave?” I growl into the back of some cousin’s knee. The room is spinning, but I bear down and decide to save the amphetamine poop-rush for after the bouquet toss. The little lump of poop and hair ties in my stomach is visible through my see-through shirt-dress and makes it look like I’ve eaten recently, which also makes me sad.  I love being sad.

I suddenly get a flashback of something Claire said while wedding planning, like such a benevolent dictator. “I don’t need you all to buy the same dress, just something gray, something you like.” Her kindness injured me. I showed up to the fitting in a knee-length, barf-spattered Hanes tee that Bobby Flay left on my futon the last time we did outercourse. Clare looked at me sideways but the only thing she said was “Dafna you’re bleeding.”

I know she meant, “That needs a belt.” She hates my waist.

And from this music I just can’t hide.

I black out then black in again while in the kitchen. A caterer is struggling to pry the broken refrigerator pipe out of my hands and I calmly explain that there’s no Freon on the whole I-95 by putting my entire hand in his mouth. I duck into the coat closet and fall asleep hugging a damp pashmina. It reminds me of the one I borrowed from Anna Wintour’s dog’s assistant. He said it looked better on me, anyway.

I’m still coming from having all that rice thrown at me. This coatrack reminds me of a young Gawker editor I used to smoke Tylenol with on Elizabeth Olsen’s roof. I tell it my secrets: “When I was three years old I saw a beetle drown in my pool.” We make junkie plans to hang out later but I know we’ll both flake. The party floods my veins (party means smack (smack means dope (dope means heroin (it may have been valve oil from the trumpet player but who cares).

Aunt Blanche, thrice divorced, has dragged me over to the Olds Table and wants to know why I look so skinny. “Are you eating?” she says, looking so fucking old. “Here, have some chicken medallions.” I light a stray boutonniere and take a long drag. “No thanks, Aunt B. I’m good.” She shakes her head.

I pull the last Adderall out of my nose and crunch it up. “Nice chat Aunt Blache.” I roll her into the tablecloth, light the end with a votive candle, and try to get a nice long toke, but all my uncles get greedy and take her from me. “Don’t be greedy,” I scream as they load me into an ambulance. This catering hall is punk as fuck.

This prude of an EMT refuses to check my butt for drugs. I fancy a man in uniform, especially one who can find my veins. “Fashion is my life,” I rattle into his crotch. I’ll end the night by screwing the phlebotomist, lighting a fire in the handicapped bathroom, climbing out the window, shooting up krokodil in a Perkins parking lot, and choreographing a pas de deux with some family’s cocker spaniel as the sprinklers turn on in the backyard. But for now, I’m lying here, staring up at Randy as he fends off my grubby hands.
I whimper “Buy my book” as the clonazepam takes hold.