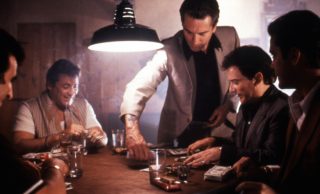 When I sat down with my boyfriend to watch the award-winning Martin Scorcese drama “Goodfellas,” I knew, as a woman, that I shouldn’t be able to comprehend it. The crime. The cold-blooded violence. The no-holds-barred adultery. Surely a film this masculine would go right over my head.

But then, to my horror, it happened: I was able to understand the entire movie. Like, am I even a woman anymore?

At first, I did what I could not to relate to the young protagonist Henry Hill’s turbulent childhood, but by the time he was a grown-up mobster played by Ray Liotta, I was thrilled by his dark sense of success, his endlessly chaotic relationships and the way he navigated his perpetual life of crime.

When my boyfriend laughed at Joe Pesci’s character’s crude jokes, I let out a little giggle, too. When he cringed at Tommy’s random fits of violence, I, somehow, was able to identify with the deeply flawed character on the screen. I didn’t even have to count silently in my head and look away during the gory scenes, like all women do. OMG, who was I becoming?

After over an hour of not just being cognizant of the expertly written plotlines, but actually engaging with them, there was a scene in which the wise guys visit Tommy’s mother for dinner. My boyfriend took this opportunity to go to the bathroom, suggesting this was the only scene I’d probably like. To my complete shock, it wasn’t. I much preferred the drug-fueled helicopter chase sequence at the end of act two.

Hold on, am I seriously getting this “guy movie?” Should I hand over my lady gun and lady badge right now?

Take all the scenes where the guys “bust each other’s balls,” for example. I wasn’t even sure what that phrase meant at first, but after witnessing this extremely hard-to-relate to male bonding phenomena, I realized, “Omg! They’re making fun of each other as a show of affection!” I was able to recall a few times in my own life when I was endlessly teased by my female friends for shopping too much or being too boy-crazy. The only difference between us gals and the “Goodfellas” is that we weren’t playing cards, drinking scotch or shooting anyone in the process. But all of that actually looked pretty fun.

To confirm that understanding “Goodfellas” has sent me into a complete and total gender identity crisis, next weekend I will see if I am able to fathom the many layers of the classic, “Casino.”

Now That I’m About to Retire, It’s Time to File that Sexual Harassment Lawsuit! Why I’m Raising My Child 100% Via Kickstarter