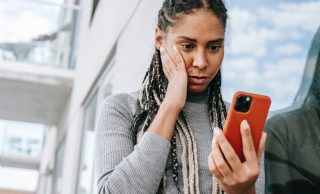 Dating can be hard, or so I’ve heard. I assume dating is “hard” for most people because they are lacking in the personality, ass, or other such department. But when I finally joined Hinge, I was struck with the shocking surprise that dating was kind of hard for me, too. And that’s when it hit me: To the great misfortune of everyone involved, the people on this app don’t get that I’m me.

If they grasped this simple and natural fact, the dating game would be a breeze!

It’s like, do these strangers not get the indefinable essence that makes me a fully formed individual and makes my mom say I was “naturally gifted at the cello and really could have done something with it if [I] practiced more”? Because they’re sure acting like they don’t.

When someone messages me “hey what’s up” and I reply “not much! how are u?” and then they never answer, it’s like, am I going crazy here? Is this suitor not intuiting that my 10th grade English teacher used my essays as an example of what a good paper looks like two times? It’s actually insane how lucky one of these jokers would be to date and fall in love with me, yet something’s not clicking.

I’m not just some two-dimensional video game character like the rest of the “Jakes” and “Amandas” on here. I’m a full-fledged person. What type of mental illness causes this fact to elude people? Do they not know about the many hysterical and charming inside jokes I have with my friends or something?

The whole thing is just bizarre.

When I’ve complained about this massive misunderstanding, people have urged me to put more thought into my prompt responses and interactions on this app, but that’s just not really something I would do.

So to the people whose names I’ve already forgotten, who failed to follow through on plans or commit time and energy to our conversation, just know that’s really dehumanizing. And next time you’re mindlessly swiping through profiles, keep doing that until you get to mine, then pay a lot of attention because hey – I’m me!