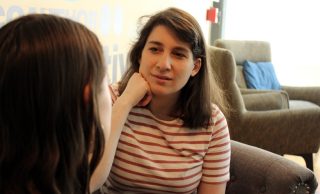 The existential threat of climate change is very real, and no one knows this better than me. I mean, probably some people do know it better than me, such as climate scientists, or people who read the news, but regardless, it’s a huge issue. That’s why it was so devastatingly hard for me when I was hanging out with my best friend the other day and she started despairing about climate change, because while I totally get it, I was not in the mood.

My friend and I were having a perfectly pleasant night in, ripping a bong and watching YouTube videos of politicians saying insane shit, when unfortunately, the topic of climate change was raised. Immediately, the vibe changed, and I noticed my friend’s breath growing shallow. I hoped she was just having a panic attack from the weed and was getting ready to pass her a Klonopin, when she said “I just can’t believe what human beings have done to this Earth. And every part of life makes me complicit in its destruction.”

UGH. Even recounting it now, I am annoyed that she attempted to drag me into this headspace.

I tried to change the subject by agreeing that life is bad and then playing a video where two little kids randomly fall over, but she was too far gone. She was using words like “grief”, “rage”, and “powerlessness”, and those are all totally things that contemplating climate change can make you feel, but randomly I was not in the mood to experience those intense negative emotions.

I said, “Yeah, it’s absolutely horrible” and she looked at me like I was the She-E-O of Big Oil because while I obviously intellectually grasp the gravity of climate change, it was clear that I wasn’t emotionally on her level.

The thing that’s so unfair about all of this, is that I’ve totally despaired about the climate before! I’ve cried about it in therapy for Christ’s sake! And now suddenly I’m some unfeeling asshole because I happened to not be synced up with my best friend’s grief over the fact that the Industrial Evolution and unsustainable growth model of capitalism have led us down a path of ensured annihilation and mass death? It’s not my fault that denial and cognitive dissonance are physically necessary in order to survive and function in this society! It’s Nader’s fault for taking votes away from Al Gore.

Luckily, I was able to best my dear friend at her sick game but bringing up Nike’s horrific labor practices, which was totally out of the blue and she had no idea how to respond. What, bitch? Do you not care about sweatshops? It was tough, but she needed a taste of her own medicine. Unfortunately, the sweatshop thing sort of compounded with the climate change thing and now she’s weeping in my bathroom while I write this. I’m not a bad person! Anyway, gotta go!