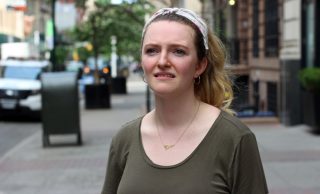 Every woman would like to walk peacefully down the street without the inconvenience of a man yelling out lewd comments about her. I personally hate getting catcalled, but what I hate even more is the fact that one of these catcallers told me my fly was down – and he was right.

Yesterday morning, when I was on my way to work, a man who was standing on my block at 8 a.m. told me to smile, that he’d like to take me out sometime, and lastly that my fly was down, right before calling me “sweetheart”.

After he told me that, I waited until I was far enough away to look down at my own zipper, and it was, in fact, down.

Getting catcalled is bad enough, but now I’m really embarrassed that he was right and I had to fix it.

On one hand, I’m grateful that someone told me my fly was down before I went to work and one of my coworkers would have to tell me instead, but on the other hand, this was just frankly too much for me to handle all at once.

Usually, it’s easy for me to walk past a catcaller with confidence, refusing to break my stride, but after this incident, my confidence has been significantly shaken.Now, every morning before I leave the house, I check my zipper countless times, simply because I refuse to be put in that same situation again. Nothing about a woman’s body, clothing, or appearance ever “invites” or makes catcalling okay, but with that being said, if it’s a truthful comment that follows the “can be fixed in five seconds” rule, it’s sort of hard to clapback against.

Not only do I check to make sure that my fly is up, I also make sure that both my shoes are tied, my clothes aren’t inside out, all my tags are down, and there isn’t anything stuck in my teeth. I can’t take another risk that the next catcaller will get my attention by telling me something that I actually need to hear.

After this experience, I’m even a little hesitant to go outside anymore. I’ve realized that the world is actually a pretty scary place, not because of degrading comments being thrown at me by men who have nothing better to do, but because one day they might actually tell me something that’s really helpful. What could possibly be worse than that?