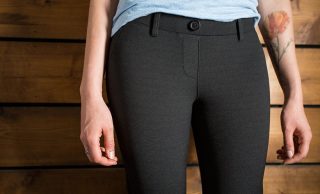 Last Tuesday morning, following a routine checkup the previous day, I received a startling call from my physician. “It’s not a big deal or anything,” he said. “But my charts indicate that since you started seeing me in May of 2002, your fly has been open at every visit.”

It must be some kind of coincidence, I thought. It’s probably just something that happens when you go to the doctor.

Then my eyes shifted down past my Ann Taylor blouse, all the way to my crotch. Where the metal zipper should have been, there was a gaping hole. My fly was splayed open. I peered into the cavernous abyss. I was greeted by billows and billows of underwear never meant to be seen by the human eye.

“I’m sorry, Darlene,” my doctor said. “From my records, it appears that your fly has been open for the past 10 years. We’re finding this very late.”

The realization didn’t hit me right away. It might have been denial, or perhaps fear. I’ve heard that the brain can shut down when confronted with extreme stress. It took days before I was able to broach the subject with my husband. He kept asking me what was wrong because I had missed almost a week of work.

As I came to terms with my condition, I coped by wearing only sweatpants (I had to borrow my husband’s, since I didn’t own any). After a few weeks of nervously looking toward my crotch, expecting the worst, I eventually reached a point where I could go outside wearing jeans again, but only after I developed a system for taking off my pants without having to touch the zipper.

I don’t trust myself to zip quite yet. I am a work in progress, still recovering, and still reeling from a decade of missed zips. I have happy memories of my twenties. But now my unzipped fly is always in the background, forever obscuring them in a cloud of shame. .

Looking back, the signs were obvious. My husband always said I looked better in skirts. Whenever I stood in front of a seated person on the subway they would give me strange looks. My pants would occasionally fall down while I was wearing them.

When I ask those closest to me why they never said anything, they give a variety of excuses: they were embarrassed for me, they thought I knew, or it was too awkward to mention.

Of course I feel betrayed. I’ve lost it in moments of grief, screaming “It was my dignity! It was my 20s! My whole 20s gone!” During one especially painful phone call with my mother, I snapped, “How could you raise me not to know? And why didn’t anybody ever say anything?!”

I am learning forgiveness. But there is still pain. There are also still photos that I can’t look at because all I can see is my open fly. And let me tell you, in retrospect it was really obvious.

My daughter recently turned five and she’s starting to wear big girl clothes. I’ve been teaching her how to zip her pants, and I’ve also been re-teaching myself. We’re learning the motions together. “Up-and-down…up-and-down, don’t forget!” we sing together as we pull on the metal tab. It’s bittersweet to watch her cherub cheeks break into a smile at the sound of the zipper, and to know that she’ll never make her mother’s mistakes.