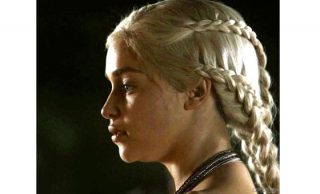 I have nothing against strong ladies, but when it comes to choosing a president, we have to be practical. Sure, lots of women would be chill as like a Secretary of State or just like a sort of hot assistant, but president? No way, dude. We need someone who I can look at and be like, “That dude fuckin’ kicks ass. But just so you don’t think I’m being sexist or some shit, that doesn’t mean I’m not stoked to finally have a strong, badass woman ruling the fictional land of Westeros. I mean they have fucking dragons! That’s some shit!

Show me a single female 2020 candidate who has a fire-breathing pet and I’ll change my mind.

The thing about a woman being the boss of America is that it’s fucking weird when she yells and when she talks it’s super boring. In Westeros, it’s cool to see Cersei lose her shit and kill some people because she ultimately remains hot and super fictional, but in this country? It would kind of suck to have a shrill bitch running shit – plus the incest is kinda fucked up. For serious. It would be kinda funny though.

My fave leader for Westeros is probably Daenerys because she is hot and kind of a bitch. It’s cool to watch someone be a huge bitch while riding a dragon in a fictional medieval land, because Game of Thrones is nothing like real life. I want a presidential candidate who knows what it’s like to wipe out on a skateboard, or just yell about what he wants until it eventually just happens. That’s the kind of leader I can get behind.

If a woman were to win the presidency, it’d be pretty hard for people to listen to her. Like how do know if she’s saying something you should listen to or just complaining about girl shit? I do think it’d be cool to see Brienne of Tarth as a King/Queen of Westeros though, because she is tall and I can relate to that.

Real women can’t speak to things like gun control when they barely ever hold guns – or leadership when they’ve never even been president. Arya knows how to wield a sword though – that’s the kind of chick I’d die for on a battlefield.

So no, I’m never gonna support a female candidate in this realm (haha, get it??). But I am in full support of pretty much any woman ruling Westeros, as long as she is hot and does not run against Bernie. That’d be so fucked up!

Being a Mom Doesn’t Get Easier, But It Also Doesn’t Get Better I LIVED IT: My Friend Stopped Following Me Online So I Killed Her