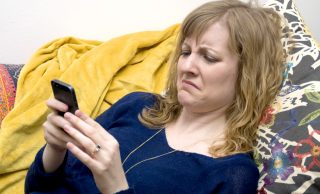 I was scrolling through Huffington Post on a Monday afternoon, minding my own business, just trying to get from a recipe for the best no-bake cheesecakes to some an article about Emma Stone’s favorite candle, when I was stopped in my tracks by a scary, upsetting headline. It loudly informed me that police in Ferguson, MO, had killed unarmed black 18-year-old, and while I managed to get past it without learning any additional details (Emma’s favorite candle is a votive) the damage had been done: I felt sad for the better part of an hour.

I shouldn’t be surprised. Even though I’m a taxpayer who just wants to raise my family and enjoy life, I’ve been experiencing depressing headlines about police brutality, then quickly moving on to something else, for my entire life. When I was barely a teenager, I made the mistake of letting my eyes flick over to a newsstand, where I inadvertently learned about the acquittal of the LAPD officers responsible for beating unarmed black man, Rodney King, nearly to death, before quickly settling my eyes on a sexy Bon Jovi magazine cover. It was the kind of innocent mistake any teenager could’ve made, but I paid for that one moment of indiscretion with a whole evening of introspection.

It really gets to you after a while – and believe me, I know I’m one of the lucky ones. My friend Maeve, a college-educated mom like me, has not only been stopped by distressing headlines describing, for example, the California Highway Patrol’s tackling and beating of Marlene Pinnock, an unarmed homeless black woman, on the side of a Los Angeles freeway – she’s twice had to deal with the aftermath of actually reading the full ledes. She describes a sense of fatigue and hopelessness that I know is shared by many in the news-reading community.

People will tell me, “Just don’t look at those sites! You know what you’re getting into.” But is it really my fault if I want to enjoy a public e-space such as HuffPo? I shouldn’t have to seek out websites that are tailored to me, just to feel safe from the knowledge that earlier this summer, the NYPD dragged an unarmed black grandmother out of her apartment and left her naked in the hallway, arrested her 12-year-old daughter and pepper sprayed her 4-year-old grandson– because they were in the wrong apartment. Headlines like that just shouldn’t exist, period!

As the mother of a 12-year-old myself, intrusive blurbs of news like this are filling me with an increasing despair for the world my son, Asher, will inherit. He’s such a good kid – bright, helpful, athletic – but that’s not what a blog editor sees. A blog editor just sees his vulnerable click potential, and for that, they could steal my son’s cheerful attitude away from him at any time.

Something must be done! Contact the editors of your favorite news blogs and demand an end to these intrusive, unnecessary and heartbreaking headlines. People like us, who’ve long suffered at the hands of the police-related news, are the ones who must change it.

I Actually Did Come on this Reality Show to Make Friends Wait, But My Period Blood IS Blue