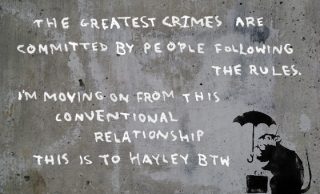 I met Banksy in June of 2012 at an all-nude game night at Lady Gaga’s house. We clicked immediately. Even through the black bandana he wore over his face, I could tell he had a warm smile. And shockingly, he was into me too. Following an intense game of Battleship, we walked arm in arm through SoHo, stopping for him to stencil a tiny rat on a fire hydrant on Bleecker Street. After that, we were inseparable.

After a little more than a year, the magical newness of our relationship wore off. We still connected emotionally, but I began to resent the fact that he knew almost everything about me, but would still use a voice changer to talk to me during dinner dates. He was out of town a lot and when he was around it became tiresome to make the hissing sound of a spray paint canister he needed to climax every time we made love.

When a friend of mine mentioned that a new Banksy had popped up in Manhattan’s vibrant neighborhood this October, I agreed to check it out with her. Part of me was curious since he’d been so vague about the direction of this new work.

When I got to the site, it took a few minutes to elbow my way through the crowd gawking at and photographing my boyfriend’s work. It goes without saying that I was very, very proud. So much so that I sent a text to the Google voice number he forced me to use, saying, “so proud of u babesy!” “Babesy” was a pet name I used because I thought it was clever and also because I still do not know his first or last name.

Once I broke through the crowd surrounding the art piece, I was stunned not by the beauty of the image, but by the message it sent. There, on the faded red brick wall was the stenciled image of rat holding a suitcase with the text “THE GREATEST CRIMES ARE COMMITTED BY PEOPLE FOLLOWING THE RULES. I AM MOVING ON FROM THIS CONVENTIONAL RELATIONSHIP. THIS IS TO HAYLEY BTW.”

I heard the spectators around me taking in the piece, calling it “brilliant,” “moving,” and “right on the pulse of modern society.” My friend I’d come with had been moved to tears, so I felt free to let my own flow as I realized my relationship with Banksy had come to an end.

The owner of the building has already painted over my breakup piece, but the wounds are still fresh. I’ve learned a lot though from my time with Banksy: that you should always work at night, centralized power should be mocked and deceived, and you should probably know at least the first name of the man you are dating.