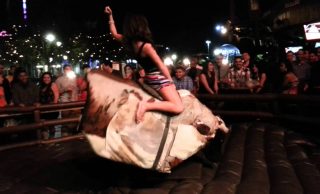 So, yeah, whatever, I’m the girl who tried to eat a double cheeseburger on a mechanical bull. And yes, I choked, passed out, and was pronounced dead for like five minutes until a paramedic restarted my heart. Why did I do it? Do the math, people: girls humping in public + girls eating burgers while grinding on something = I thought it would be super hot. Well, that backfired, cause I kind of died.

This is what happens when you fly too close to the sun.

A lot of people are calling me irresponsible and stupid and asking me why I didn’t just ride the bull first, then eat the burger, or eat the burger before going on the bull. They’re saying that I should have realized that the performance of a 90-pound model eating a 1200-calorie burger on an LA soundstage can’t realistically be reproduced by a regular woman at a bar. I can’t even drink a Fresca in a recliner without having a near-death experience, so why on earth would I attempt this meaty circus act? Well, Josh was there, and I haven’t had sex in two months, and my burger came out to my table right when my name was called at the bullring, and I didn’t want the burger to get cold, and fucking Kelsey was on the bull after me, and I knew Josh was single, so I really didn’t have a choice. To all the haters: How smart do you feel now, knowing my side of the story?

Of course I have my regrets. I regret when all the ketchup fell onto my lap the second they turned the mechanical bull on, completely ruining my denim diaper. I regret asking all my friends to film me because I wanted to get as many angles as I possible for when I edited the footage together in slow-mo. I also regret when all my friends texted my mom that I was dead and then forgot to text her back when I was alive again. I regret projectile vomiting meat into the paramedic’s face immediately after I was revived. I regret projectile vomiting into the paramedic’s face a second time when he came back to check on me ten minutes later—that one I really could have controlled. I’ll be the first one to tell you I have regrets. But for those 30 seconds when I was riding that bull like a goddamn cowboy, a dripping double cheeseburger crammed into my mouth, I felt alive and hot in a way I never had before and never will again. For that sweet, fleeting moment, I was fucking-Josh-level hot.

So could someone please tell him I’m alive again?

Am I Turnt or Just Thrilled With the Way My Blue Apron Dinner Came Out? My Depression Is Not Your Business Unless Your Advice Involves Crystals