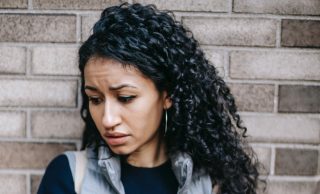 Binge-watching TV shows is my favorite pastime. However, this ritual of escapism was completely ruined for me when I noticed that the “impoverished” character in my favorite show had a bigger apartment than me.

I simply could not believe what I was seeing.

As a production assistant, I’ve always considered myself to be middle class. I mean I have a Master’s degree for Christ’s sake! I wouldn’t say I’m rich, but I’m by no means poor. At least, I didn’t think that Jackie, an unemployed woman who’s still figuring her life out, had a nicer kitchen than me.

I couldn’t even continue watching because I kept getting distracted by the abundance of floor space, large windows, stainless steel appliances, and natural light coming into her room. Surely you would think she was living in a place like Minnesota or Texas, where housing might be slightly affordable, but this character lives only ten blocks south of me.

How are you broke with a one-bedroom apartment in the Upper East Side?

Now, I’m not saying poor people can’t have nice things. As a film school graduate, I just think there needs to be an accurate representation of brokeness in the media.

There’s just no way that character, a 23-year-old MFA student and barista, could afford this much square footage without fraud being part of her story arc. On top of that she’s supposed to be an orphan?

There are so many plot holes that perhaps I should email the showrunner.

It’s been three weeks and I can’t stop shaking thinking about the fact that she had an in-unit washer and dryer. If I could afford it, I would talk to my therapist about this. For now, I will simply never consume another piece of media ever again. By the way, do you think I have grounds to sue for emotional distress? And does anybody know a good pro-bono lawyer?

Why It’s Reductive to Call Me the ‘Female Santa Claus’ Just Because I Climb Down My Neighbors’ Chimneys and Drink Their Milk My Phone Battery Died After I Ignored Every Warning About It. Here’s Why I’m Suing Anyway.