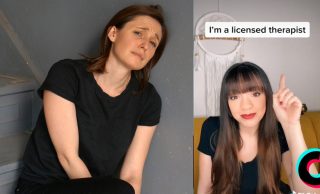 I used to think that TikTok was a space where I could express myself freely and creatively by making short videos of myself and just having fun, but last Saturday I found that I was wrong after my most recent TikTok was stitched by a therapist on the popular social media app.

Last weekend, I filmed myself ranting about how the Dune movie falsely advertised that Zendaya would be in more of the movie than she actually is, and while I admit that I might’ve been a little too passionate, saying things like “this is the biggest tragedy I’ve ever experienced in my life,” and “I’m not sure if I even want to wake up tomorrow after learning this horrible news,” I still don’t believe that I was expressing any explicit signs of mental illness.

The next day I found that not only did the TikTok go viral, but it was stitched by the popular user @the_based_therapist_679, where he not only pointed out my obsessive tendencies, but also addressed the behavior in all of my TikToks prior.

According to this therapist, I have anxiety, depression, and OCD.

I used to think that I would like to receive free therapy, but after this experience I don’t think I can trust another therapist again. No one should have to see a licensed professional dissect your behaviors as a warning for millions of other viewers, but it happened to me, and I don’t know if I’ll ever be the same.

Maybe I shouldn’t have been so involved with the Dune franchise. Maybe I should have just kept my thoughts to myself. If I had just kept quiet, then I wouldn’t have had to see countless comments calling me “delusional,” “crazy,” and a “total psycho,” but then again, I also wouldn’t have nearly as many followers as I do right now. I just hit 10K! I’m still really embarrassed about the whole thing, though.

I don’t think I’ll ever recover from my TikTok being stitched by a therapist. I probably won’t make another TikTok again. Not until TikTok makes it a rule for medical professionals to stop using the app, but I know that will never happen because of the huge fanbase of Nurse TikTok.

I hope that everyone knows the potential risks of posting themselves on the internet. Once you post something online it never goes away. Not only that, but it can also be addressed by a licensed therapist whose goal is to make sure that everyone knows what the signs of obsessive-compulsive behaviors are.

Also, don’t talk about celebrities in your videos, because they might post it on their Instagram stories and point out how scary your behavior is (sorry Timothée)!

Why I’m Saving My Sephora Points for My Dowry I LIVED IT: I Called My Boss ‘The Big Cheese’