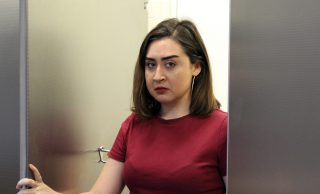 The Buddha once said that life is suffering, and he had some pretty good reasons for suggesting this hypothesis, but I now know it to be true. Indeed, I thought I knew misfortune, but I never truly came face-to-face with the harrowing trials of human existence until yesterday, when my coworker and I went to the bathroom at exactly the same time.

My heart said to turn back, but by the time we locked eyes, it was already too late.

Going to the bathroom at work used to be something I looked forward to. It was a time to sit and go on my phone, which is exactly what I do at my desk, but still. But that all changed when I opened the door to the two-stall restroom, then felt a presence looming behind me and realized my office mate was going right in with me.

When I first looked back with horror to gauge the situation, she smiled at me and say “Hey!”. This sicko was really acting like we two people who sit next to each other all day making occasional small talk about the weather weren’t about to excrete bodily waste from our holes in tandem.

I thought about making a break for it. Just leaving the bathroom, leaving the office, and riding the rails to wherever they take me, but I wasn’t sure where to find “the rails”. In lieu of this, I made frighteningly uncomfortable eye contact with my coworker no less than four times as we made our way into our respective stalls, then waited for things to go from bad to worse.

Within seconds, it became clear that we both had to shit: the impasse of the century. She was waiting for me to leave, I was waiting for her to leave, we both were presumably wishing for death. I didn’t even have to pee, so I ended up sitting on the toilet for 30 seconds, blowing my nose, then flushing that, and washing and drying my hands, all while she reigned victorious — waiting out my charade so she could take the uninhibited dump of a lifetime.

The experience left me distrustful of the people around me, emotionally scarred, and constipated. I don’t know if I’ll ever get over this, but I do know that I won’t. Now if you need me, I’ll be searching for new jobs with an absolute log still in my colon. Fuck you, Rebecca!

Why I’m Okay With Men Manipulating Me as Long as They’re Nathan Fielder I LIVED IT: I Gave a Man a Fish and He Took a Picture With It