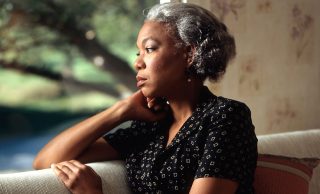 Everyone says you eventually become like your parents, and I thought I had emotionally prepared myself for that. I knew one day I might tell jokes like my dad, or talk too loudly on the phone like my mom, but never did I consider something so dire would happen to me. In a feat that has, frankly, made me afraid of myself, I just sighed my mother’s own sigh.

It happened when I least expected it: I told my boyfriend to take the chicken out of the freezer so that it’d be defrosted by the time I got home (a very reasonable request), but when I arrived, he had forgotten. Before I knew it, I became possessed by the matrilineal spirit. I let out a sound foreign to myself: an exasperated sigh that was classic Diane.

When I realized what had happened, I was in denial, assuming the sigh I had just sighed must have come from my mother herself. I ran throughout the house looking for her, shouting “Mom?” then transitioning to, “You come out here right this instant, missy!” which only made me fear for myself even more.

As I was running frantically through my home, I passed a mirror, and realized the mom I was searching for was actually within myself the whole time. I looked at my reflection and brought a shaky hand to my own cheek, wondering how this could have happened so fast. My face appeared to transform beneath my fingers, morphing into that of my mother. When I expressed this to my boyfriend, he said, “Lol, what the fuck? You’re being crazy right now.”

We would address this comment at a later date.

I couldn’t believe it. It was the sigh I had known for so many years, the sigh that said, “why can’t I trust you to do this one thing?” and, “please wear a bathing suit top that covers your nipples” in one breath.

I turned to my boyfriend and shook him by the shoulders vigorously, yelling, “Don’t you understand what this means?? Diane! I am her and she is me! We are we and us is us!” Somehow this didn’t make complete sense to him in the way to did to me.

I finally calmed down enough to catch my breath, and my boyfriend reminded me that sighing my mother’s sigh didn’t mean I was no longer my own person. Perhaps I would have believed him, but at that exact moment, something even worse happened: I sneezed my mother’s sneeze. Remember me, friends. Remember me as I was, not as I am, which is Diane.