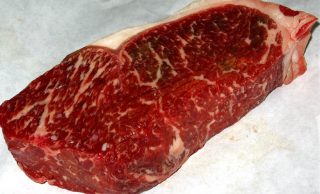 Hey, preschool teachers and HR reps. It’s me, Dude Corner. Imma take a break from purposefully injecting myself with HPV to give you a list of dank-ass steaks you can cook for us dudes while we still have morning wood. Aw, you shouldn’t have—EXISTED!! Hahaha. Make yourself useful and make us a sandwich, where the bread is steak and the meat is steak and it’s a steak. Make us a steak.

Burning your mouth is super manly. Throw this shit in the oven and fill up that oven with hot peppers. GHOST PEPPERS ONLY. We watched a Nat Geo special on ghost peppers and they’re the hottest ones in the world, just like your cousin Noor. Ugh, we fucking love Noor. Pull out the meat and drown it in Frank’s Red Hot, which is the BEST. Then bring it to us on a plate made out of issues of Esquire and let us eat that shit. Bet now you’re glad we don’t like going down on you, huh? It would burn worse than the first few times we gave you chlamydia! No backsies!

We hate watching you work hard to live up to our standards, which are met by no living woman. So chill out! Just hacky-sack a filet into a pan and let it do what it does. Maybe add some spices or sauce or something, or maybe don’t, then stick it in a hamster ball and roll it right into our bed. Just be chill, babe. Like the opposite of how you were when you caught me having sex with your Keurig machine. That thing came onto ME!

Get weird with it! Throw on some cereal, some Greek yogurt, some of those slimy seeds you put on everything, maybe some Drano! Oh man, remember in The Sixth Sense where the little ghost girl is barfing cuz her mom poisoned her? Gross! You hate that movie. Hey, maybe fart on the steak! C’mon babe, you have the cutest farts. Put it on a plate on my pillow and leave my house.

There you have it: huge tits! You have huge tits. Also, there are some steaks you can make us in bed. And don’t try to put and any girl veggies on that shit. Steak rules!