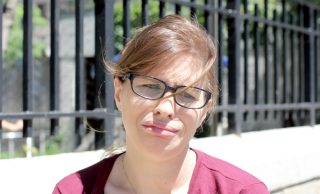 So there I was, all alone on a Friday night with NOTHING to do, when out of nowhere I saw a news report saying that all seven of my closest girlfriends had drowned in a freak boating accident on Lake Michigan. I was stunned: Was this a joke? A prank? I couldn’t believe my ears. How could they all be dead? It just wasn’t possible. There’s no way they would all hang out without me.

I was this close to shedding a tear when I realized that no one even told me that everyone was hanging out tonight! When I texted, they all said they were “busy”. And the worst part is, it happened at Jenny’s lake house! I love Jenny’s lake house!

I couldn’t help but wonder: Why wasn’t I invited to the girls’ night that ended in the fatal accident?

I wracked my brains, trying to come up with an explanation. Was it because I flirted with Jenny’s boyfriend that one time? Okay, I know what you’re thinking, but I had no idea he was Jenny’s boyfriend! I patted him on the shoulder a couple of times and told him he had “kind eyes”, but trust me, as soon as I realized he was Jenny’s bf, I abandoned ship. If only my friends had done the same.

But was that really so horrible that they didn’t want to invite me to the boating party everyone died at?

Maybe my phone was broken. My phone has been a bit glitchy lately, so maybe that’s it. But then again, they knew my phone was acting up, so why wouldn’t they have just told me in person? I’m having major FOMO at the thought of this wild boat party right now! I just know they played a ton of Cards Against Humanity before capsizing under a rogue wave. They know that’s my favorite game!

How could God let them all die on a boat without me?

What did I ever do to them that was horrible enough to merit this tragedy-blacklisting? The only thing I can think of is that I did say that one thing about Britney’s dead dad that one time. But I was in a really bad headspace and I took full responsibility for it and I would take it back if I could! Because of my foolish actions, I was forced to miss out on a night full of memories that no one will ever forget, as long as there is a life after death.

Was it maybe a weight limit on the boat? Because I hit my MyFitnessPal goal this month and they all know it! Why, why, why?

They must have just forgotten to text me. Yes, that has to be it. I’m a good friend who totally deserved to be standing on Jenny’s boat that fateful night. I obviously don’t want to be dead, but I really hate being left out!

Maybe someone at the funeral will have more info, or maybe I’ll have to live my whole life not knowing why I wasn’t invited. Who knows? But it doesn’t matter. As far as I’m concerned, all of them can go straight to hell.

I Cut Sugar for Just Two Weeks and My Husband Left Me We’re Not a Cult, We’re Just Adult Coloring Book People