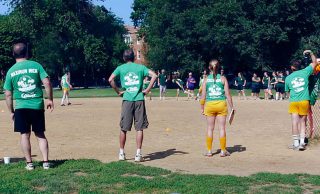 Last year, I joined my boyfriend Kyle’s Zog Sports dodgeball team. At first, it was great. I thought I was really getting along well with everyone. After games, we’d go to cool crowded bars with other like-minded professionals to drink beer and play casual bar games. Things like that.

I soon saw what Kyle was capable of out on the court. He was a genius. An artist. I wondered if he couldn’t be more than just the captain of a middle-ranked Zog team; that maybe he should think about going solo.

As soon as I planted this idea in his head, he started coming to me for advice and ignoring the other teammates. The team started turning on me. Maybe they were jealous of our closeness. Soon Kyle was accused of not being as into the game. They thought he wasn’t really dodging the ball, or making much effort to get people out. He was also accused of skipping too many practices to sit at home with me and discuss what the reality of Zog Sports meant, on a spiritual level.

Anyway, everyone was mad at me and it was like, what is this? I’m not the Yoko Ono to the John Lennon of this Zog Sports team, am I? Are they accusing me of breaking apart the dynamic when really I’m just a woman dating a man I love even though he’s kind of fickle and self-involved? Because that’s what it felt like.

He seemed so inspired in the months before I joined, creating some of the best dodgeball plays I’ve ever seen. Then after I joined, the other players were like, “Hey Kyle, where’s your head at? Chelsea’s not even part of this team.” I always thought that part was weird, because I hung around the field commenting on what they were doing and also had more than seven different colors of Zog Sports t-shirts.

Kyle and I decided, screw it, we’ll start our own two-person dodgeball team. It was a great idea! But everyone hated it. No one liked Kyle without the rest of the team, and frankly it may be years until they’ll begin to appreciate the weird, innovative shrieking I added to many of the plays. Also, we were only two people, so we always lost.

I feel like Kyle’s—our—Zog Sports team, and all of the Zog Sports dodgeball fans, will always see me as a threat to Kyle’s talent, because he was so clearly talented. Or at least, a lot of people thought he was, because his team made him look really good, even if he probably wasn’t the strongest team member and the goalie was really underrated and, really, dodgeball-wise, that goalie was probably the most talented even though everyone hates him for some reason. So yeah, I can see the Yoko Ono connection now that I really think about it.

I didn’t fully see the Yoko and John comparison until we’d already printed out a picture of us—Kyle naked and spooning me while I wore all seven Zog Sports T-shirts—for promotion of our two-person dodgeball team. Oh, well. I try to avoid the controversy these days. Especially since Kyle got shot multiple times in the back.

Lifestyle Changes I, a Freelance Writer, Think Might Prevent Cancer We Get it Julie, Your Boyfriend Loves You