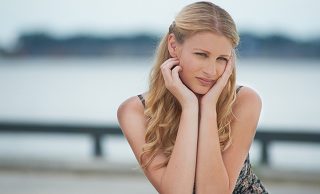 It all began on that fateful Wednesday morning in mid-January. I awoke to an overflowing dirty laundry basket and had just ten minutes to get ready. I naturally went for a look that was equal parts “business as usual” and “I’m totally wearing my last pair of clean underwear,” which meant I left the house in a crumpled chambray shirt, denim jeans, and hastily grabbed my roommate’s vintage denim jacket on the way out the door. To this look, I added my usual denim backpack and skipped off to the bus. I didn’t realize my sartorial slip until I was halfway to work, but by then, it was too late.

Have you ever wondered what you would look like with your head disembodied, floating awkwardly atop a sea of blue? That’s what it’s like to be the denim on denim on denim monster. The taunting you’ll endure, from yourself as much as others, is soul-wrenching.

“Do you know if this the limited or express bus? Your outfit is terrible.”

At the coffee shop where I worked, their looks were even more judgmental than their usual, “Why is this barista staring at her outfit instead of making my coffee?” condescension.

When I grabbed a drink with a friend later that night, she said I looked “fun.” That’s right. Not cool or hot or skinny but “fun.” Fashion should never be fun.

And when I got home to my boyfriend and asked how his day was and he said he was “really tired.” He wouldn’t even look at me in my denim tuxedo of shame. Sure, I could have at least taken off my jacket by then, but it didn’t even matter. I would forever wear the scarlet “D” of denim-on-denim-on-denim shame.

It was then when I went into our backyard, grabbed a can of lighter fluid, and burned everything I was wearing, including the contents of my denim backpack. But I didn’t stop there. I took every piece of denim in the house and threw it in the denim funeral pyre. And just like that I felt a cleansing sensation throughout my body. I was purified. Ready to move on from this tragedy to face another day.

I put the denim cremains in an urn that I now keep in the basement laundry. Never again would I relive this laundry day sin. But I will never forget.

We’re Piercing My Baby’s Tongue. Here’s Why. Don’t Judge – My Bad Music Got Me Through a Bad Time in My Life