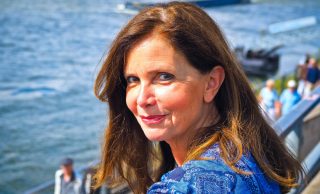 Sometimes when you’re rummaging through the Costco bag and find a croissant to eat while standing up and spilling crumbs all over yourself like a bear going through garbage, something strange happens. Your mother appears out of nowhere in front of you like a beautiful ghost, and you hear her whisper a number, again and again.

“Mom! Why do you keep saying that?” I asked. “Are you possessed by Sesame Street’s Count von Count?”

“No,” my mother answered. “That’s just how much I weighed when I was your age.”

Yup, that’s right: My mom told me how much she weighed when she was my age — a number that reflected a probably unhealthy relationship to food in her mid 20s, and one I certainly could have gone to the grave without knowing.

How did this woman who reared such solid stock weigh so little at my age? I guess she didn’t eat Costco croissants as much as me. And why was she telling me how much she weighed? What was I supposed to do with this information?

I stood there shocked and confused. Did she want me to congratulate her, or cut my arms off so I could quickly bond with her for being the same weight as her when she was my age?

I asked her if she is trying to have a hashtag Humble Brag moment, to which she replied, “I don’t know what that is, I’m just telling you how much I weighed when I was YOUR age.”

Is my mom fucking okay? Does she not realize that actions have consequences, and now that I know this information I will have to pack my bags and run away to Aruba where no one can tell me how much they weighed at my age, or they can, but I won’t really care because they’ll just be strangers in Aruba?

The whole ordeal has taken a toll. I may never even count numbers again, in fear that I may count up to the number of pounds my mom weighed when she was my age.

At the end of the day, life could be worse. Just kidding, I wish that I could launch myself into space and weigh nothing so then I could have something to brag about to my mom!

How I Got Laid by Rebranding My Pussy as a Liminal Space I LIVED IT: I Watched 50 Harry Styles Reels and Now the Instagram Algorithm Thinks I Like Harry Styles