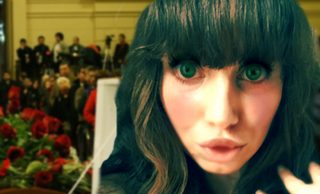 When my grandfather died last year, it was sad. Like, probably the saddest day my family has had in awhile. So I never in a gazillion years would have thought that the selfie I took at his funeral service would launch my modeling career.

Crazy, right? Tons of girls want to be discovered by the fashion industry, but almost nobody has it happen using a funeral parlor’s wifi network. So here’s what happened: The first thing I did on the morning of the funeral was get up, take a shower, and tell my mom that I didn’t have time to eat breakfast, because I had to make sure I had enough time to make myself look really, really good. You know, to cheer everybody up. I feel like when you have something pretty to look at, it can totally turn your day around. That’s why I keep so many pictures of myself on my phone. Also, whenever I got dolled up, Grandpa would call me his “little pageant queen.” He loved me when I looked good.

So I spent the whole morning getting ready, and we were almost late to the service because I was finishing up my second layer of makeup (I like to layer my waterproof mascara over regular mascara, so you can cry, but without all the clumps). Finally, we piled into the limo and made it to the service. Right away, my cousin was like, “Wow, Sophia Lindsay, you look amaze-balls right now.” And I was like, “Thanks Liv, but today is about Grandpa, who this rose blush is in memory of because he loved roses.”

While the priest was talking about ash and dust, it occurred to me that I wanted everyone to remember this day for the rest of our lives. I would hate for everybody to be sad, go home, and then a week later be all like, “Oh no, I’m already forgetting what Pop-Pop and his funeral were like!”

So I took a few selfies while we were waiting for the service to start. Nothing special, just your standard overhead, chin down, forehead tilt, Keira Knightley-smirk selfie. Already, some people started giving me these weird side-eyes. I ignored them; after all, we all grieve differently. When they started rolling his casket back out the the hearse, that’s when I took it: the selfie. Just me, the stained glass windows, and a little corner of Grandpa’s mahogany coffin.

At the time, I didn’t realize what an historic moment this was. Don’t get me wrong; I knew I looked insane and my makeup game was totally on fleek, but I just didn’t know that other people would respond so well to my beautiful expression of grief.

Unfortunately, I used up the last 1% of my phone’s battery trying to get the right angle. Since my phone was as dead as poor Grandpa, I had no idea, but apparently all throughout the rest of the funeral my Instagram was blowing up. Once we left the cemetery and went to lunch, I of course found an outlet to plug my phone charger in, and no joke, 100,000 likes and 8,000 comments, all between the time we were at the church and the moment we lowered my grandfather’s body into the ground. Sometimes the most amazing things can emerge from a tragedy.

I couldn’t believe how many people were loving this #funeralselfie. Some of the comments were just so sweet: “Wowwwww,” “Ur so hott,” “(clip of a cartoon wolf going ‘Awooooooga!’)” It was amazing to see people so inspired by my bravery.

Of course, there were a few negative comments too. Like, “Are you really at a funeral?” and “This is so disrespectful” and “What is wrong with you??” But I just thought, “What would Pop-Pop say to these haters?” I mean, he fought in the Korean War, and war is like, non-stop fighting back against your haters. So I realized he’d be all like, “Haters to the left!” Because he always said that The Left were commie pinko scum, and that’s like an old-timey term for haters.

All of a sudden, I get this DM on Twitter from THE WILHELMINA MODELING AGENCY saying they want to give me a contract. I mean, can you believe it? One minute I’m burying my grandpa, and the next, I’m a model. I guess I should have been wearing black more often!

I’m excited to announce that following runway work in New York and editorial spreads for Vogue Italia, I will be the face of Pacific Sunwear’s Summer 2016 line. As the granddaughter of a Korean War vet, representing PacSun is a great way to honor the work my grandpa did in the Pacific.

After 14 Years, I’m Finally Ready For This Jelly Let’s All Rave About Our Mediocre-Looking Friend!