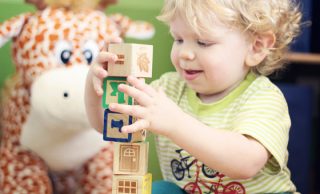 When my husband and I got the news that we were officially going to be the new parents of a 5-year-old boy named Chris, we couldn’t have been happier! We fell in love with his photo: a happy kid with dark blue eyes, wavy blonde hair, and dimples that just wouldn’t quit! So you can imagine our reaction when a boy who looked nothing like the cute little Chris we expected walked through our front door.

Our worst fears were confirmed: Chris had purposely fudged his online photo.

Cute dimples? Zero. Blue eyes? Maybe, if you got close enough. And that wavy blonde hair? It was nothing more than a nest of dishwater brown curls. The worst part? His name was actually spelled “Kris.” Who the hell was this kid, and why did he deceive us?

It was difficult at first to conceal our horror from Kris. We tried to play it cool, asking him some ice-breaker questions that would hopefully relieve the tension in the air. Could a child who catfished his potential parents be our angelic dream child? And how could we be dream parents if we don’t accept this child for his “personality”? We didn’t want him to know how truly disappointed we were.

Don’t get me wrong; I’m not a shallow person. I love people for what’s on the inside first, not just their looks! But I’d be lying if I said it isn’t hard to make eye contact with Kris since he came home. I mean, imagine you are ordering a filet mignon at a four-star restaurant when they send you a dumpy five-year-old instead. Wouldn’t you be disappointed?

Nevertheless, my husband and I decided to forget about Kris’s looks, forgive the betrayal, and attempt to learn more about his personality. Sadly, Kris’ life seems pretty boring: no friends, no hobbies, and no family. Yawn! Must be that shitty hair. If he knew how much of our love for him was banking on this moment, you’d think he would try a bit harder!

Since we can’t return Kris, we’ve decided to be optimistic about his eventual development into adulthood. It isn’t impossible that Kris could one day turn into a hunk–after all, it happened to George Clooney!

I Don’t Trust Men Except for the One I Just Asked to Watch My Laptop I Vote With My Vagina, Which Means I’m Voting for Rob’s Dick