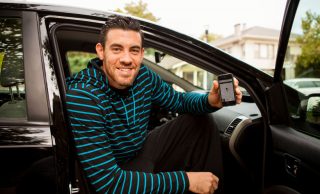 When I was younger, I was looking for love in all the wrong places: I was on OKCupid, Match, and Tinder every chance I could get. Even though those years were happy ones, I wanted more. I wanted romance, and a guy with a sick ride who would wine and dine me until we grew sort of old.

Cut to Friday night – I just finished my usual primp to pimp routine, which involved a bottle of wine and several Xanax. Suddenly I remembered my friend had given me a $30 promo code for some new hookup app called Uber.

We got to the restaurant and I vomited on the sidewalk. Raheem handled it so well—he took care of me and asked if there was someone he could call for me. I was thinking, “Wow, this guy is really sweet.” Before we even entered the restaurant, he insisted on taking me home, asking if I have a roommate or anything. I tried to kiss him, hard. He continued to ask if I have anyone I could call. I thought, “What a gentleman, he’s trying to see if I have a boyfriend.” He asked me if I was visiting or if I lived nearby. I batted my eyelashes and said,”Fffffttttt” because I tooootally forgot.

So far, the date was a perfect 10. This guy was Uber cute, Uber sweet and he didn’t seem to mind that I kept falling asleep.

I suggested we go back to my place and he mentioned something about his wife and children and that we were already parked outside of my building. This date was flying by; I didn’t even remember the drive home. I told him I wanted to take him to Applebee’s and order appetizers. Raheem told me to go home. I told him he could chill out on the chivalry, we met through a hookup app after all, and suddenly Raheem was all, “Get out of my cab!”

Suddenly it dawned on silly me. I’d been sitting in the backseat for the whole date and Raheem’s photo ID was displayed on the back of his seat. OMG. I get it. Sort of. I fell out of the cab and the next thing I know, I woke up on my floor to an Uber receipt of $230. I looked down at my clothes and could tell I hadn’t gotten laid.

When I complained to my friend about the app, she explained that Uber is not a dating app. WTF! It should be, right?!

Every Morning, I Wake Up With More Glitter On Turns Out These Seasonally Scented Candles Don’t Fix All My Problems