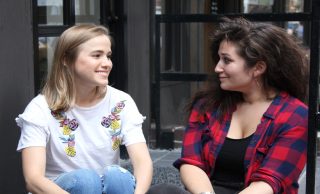 Melanie has been one of my closest friends for years. But with a cruel move that nobody could have expected, it seems she wants to put an end to that.

You see, Melanie is a highly paid business consultant and even though she suggested a very nice place for dinner last Friday, she proposed that we split the bill, as if that is even fair or kind.

My heart sank. This woman has been giving vague, expensive advice at Boston Consultants since graduating college, and she wants to split the Cheesecake Factory bill? How could we maintain a relationship after this?

Do I look like I can afford Cheesecake Factory whenever I want? I ate until I was painfully full for a reason, and that reason is a wealthy friend who works at a management consulting firm, and also the three-inch binder menu at the Cheesecake Factory.

I was nibbling on the dessert I ordered (why would I pay for that when I have plenty of tiny clementines at home?!) when Melanie Moneybags said she was cool just splitting the bill down the middle rather than adding up our individual orders or acting like a real friend and just saying, “Don’t worry, I got the bill.” Even though she never did this before, I felt like our entire friendship was a lie. Second, didn’t she say she was doing consulting for two years max?

Melanie bought a washing machine when she was 23. I didn’t even wash all my clothes until I was 26. Yet, here I am, with a pending Venmo request for “much-needed girls night :) love you!” As I wonder if I have any real friends at all.

How can I be expected to keep up with the glitz and glam of a consulting engagement manager, who dines at places that look like the Disneyworld palace of a Russian oligarch? If she expected me to pay for my exorbitant meal, we should have gone to Chipotle like us normal do.

This tumultuous experience made me realize I need to hold onto the friends who really matter – the ones show me they care by paying for dinner, or if they make under six figures, at least get the tip. Is that so much to ask?

My Boyfriend Lets Me Lift Heavy Objects Because He’s A Feminist Eating Me Out Is a Marathon, Not a Sprint